A digital twin is a virtual model designed to accurately reflect a physical object. A digital twin can be manipulated in the digital world in a manner that is helpful for decision-making in the real world. For example, digital twins of products are used to model development ideas and test their effectiveness at much lower cost and with much shorter time frames than traditional product development. Similarly, digital twins of industrial equipment can be used to model maintenance schedules, failure rates, and other important data for optimizing equipment life cycle cost. Digital twins often involve 3D representations of the physical object(s). 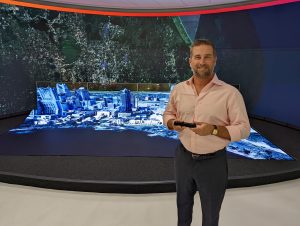 Tim Giuliani, President & CEO of Orlando Economic Partnership, is a recognized leader in economic development and a Certified Chamber Executive dedicated to creating a new model for economic and community development that advances broad-based prosperity for all. Under his leadership, the Partnership has developed an internationally awarded marketing campaign to fuel business development efforts, resulting in announcements over the past five years of 20,000 new jobs and $2 billion in capital investment.

When Tim became familiar with digital twins, he quickly realized the concept could be applied to economic development, and he envisioned an immersive experience of the Orlando region that could be used for business attraction. Tim was not interested in a limited technology that relied on personal gear like a VR headset. Instead, he had in mind an in-office, multi-dimensional experience that would capture the breadth, depth and diversity of the entire Orlando region, eliminating the traditional approach of an office meeting using slides or video followed by hours of driving. 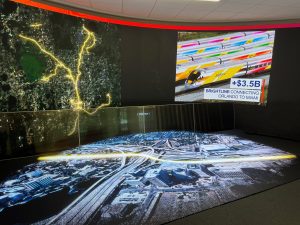 “Our goal was to create a real ‘wow’ factor for our community so that when we’re hosting companies that are visiting competing metro areas it sets us apart,” Giuliani

said. “To accomplish that, we partnered with Unity, the world’s leading platform for creating and operating real-time 3D content, because of its experience building digital twins for other organizations including the Vancouver International Airport, Hong Kong International and the city of Paris, France. What resulted was a first for digital twin technology, which has not previously mapped a region to this scale. It will change the way we do business, and the way businesses immerse themselves in all Orlando has to offer.” 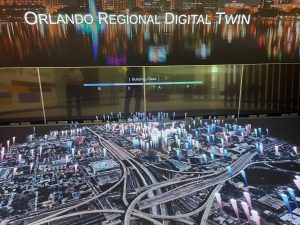 Tim engaged the OEP team to develop and implement a digital twin of the Orlando region, incorporating 3D, geospatial data, Orlando’s strengths and assets, and the latest hardware. The result is the first of its kind: a fully-immersive experience in a dedicated meeting space, showing Orlando in 3D and incorporating large geospatial data sets that can be customized for the business prospect, like traffic patterns, talent density, and points of interest. Using this digital twin, the OEP team is able to provide prospects a cutting-edge virtual experience of the entire region, specific areas, and potential sites. The combination of dedicated office space and advanced hardware displaying customized 3D representations of Orlando as well as spatial displays of customizable local data creates a compelling experience for businesses considering Orlando.

GIS WebTech is pleased to name Tim Giuliani one of three winners of the 2022 GIS WebTech Award for Technology Leadership, and our entire team congratulates him!