EDPA is a private, non-profit organization funded by more than 60 Alabama companies that works to attract, retain and grow jobs in Alabama. The Partnership has been a key player in recruiting companies such as Mercedes-Benz, Boeing, Honda, Thyssenkrupp, ArcelorMittal/Outokumpu, Hyundai and Airbus to Alabama. EDPA has joined with state and local officials on hundreds of projects, both large and small, that have added thousands of jobs and millions of dollars to Alabama’s economic base. 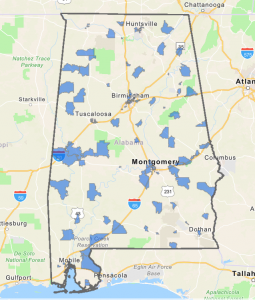 EDPA previously utilized a custom-built app for online sites and buildings data, but it was a struggle for EDPA to keep up with evolving technology. Realizing the app needed to be replaced, EDPA followed a rigorous selection process and evaluated Recruit alongside competing products to identify the technology that would deliver the most accurate data, the most advanced tools, and the most engaging user experience. EDPA also focused on identifying a provider that would work with them as a trusted partner.

“It ended up being an easy decision to choose GIS WebTech and their Recruit technology over the legacy providers,” said Greg Blalock, EDPA’s Project Director for Buildings, Sites and Communities. 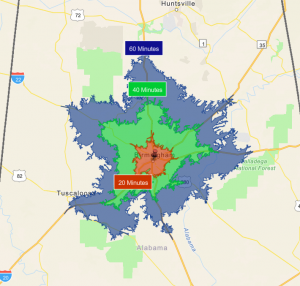 8:00 am Monday Drive Time into Birmingham

EDPA’s selection of GIS WebTech’s Recruit is a great example of why GIS WebTech is the fastest-growing provider of technology for economic development. As noted in our year-end 2019 blog post we have averaged over 160% growth per year for the last four years, driven by our laser focus on technology leadership and customer success.

Our entire team at GIS WebTech is excited to welcome EDPA to our growing roster of customers, and we look forward to a close and productive working relationship!